Iran is known for its prominent and unique architecture, manifesting Persians artistic nature, creative minds and engineering skills from ancient times to the contemporary masterpieces of art and architecture. As a pioneer in various techniques, Iran has been a role model, for many countries throughout the history, in terms of architecture, engineering and technical skills.

Persian architectural and engineering methods have widely been used, imitated, and modified in various structures in different parts of the world. Many of the later modern facilities, structures, architectural and engineering methods were the modified versions of the initial exemplar. Such as Qanats, which could transfer cold and fresh water to farther places, or like the natural air ventilation in the “City of Wind Catchers”, Yazd.

In this article we’re taking you to the first Iranian city which made it to the list of UNESCO World Heritage sites, the city of adobe houses and wind catchers. We’ll walk you to its famous square “Amir Chakhmaq Square” and to Amir Chakhmaq Complex, one of the eye catching yet important places in the city of Yazd.

Amir Chakhmaq complex is a square located in the historical urban fabric of the city of Yazd and is known for its symmetrical alcoves. This big complex which dates back to the Timurids era consists of, various buildings such as Bazaar, two water reservoirs, Tekyeh (A place where Shiites gather to mourn Muharram), a mosque, a caravanserai, Monastery, cold water well and qanat house.

Mir Chakhmaq (as some locals call it), has been a religiously, politically and symbolically important place for the people of Yazd, as it has been the location for people’s gatherings such as marching, demonstrations, martyrs and scholars’ funerals before and after the Islamic Revolution of Iran. Due to its significance, Tekyeh was registered as one of Iran’s National Monuments in 1951, and later in 1962 Mosque of Amir Chakhmaq joined this list followed by other structures a few years later.

At night, after the twilight hours, the building is lit up with orange lightings under the arched alcoves, which makes it a beautiful scenery.

Amir Chakhmaq complex, located in the city of Yazd, dates back to 15th century, during the Timurid era and was built by Amir Jalal ol-Din Chakhmaq one of the emirs and commander in chiefs of Shahrokh Teymouri. After his assignment as the governor of Yazd, with the purpose of city development, he decided to build a complex consisting of a Bazaar, two water reservoirs, Tekyeh, a mosque, a caravanserai, Monastery, cold water well and a qanat house, with the help of his wife, Seti Fatemeh Khatoon. In front of the Jame’ Mosque, which was the most important structure of this complex, the big Amir Chakhmaq square were built, later the mosque was also named “Amir Chakhmaq Mosque”.  The same year the mosque was inaugurated, Haj Qanbar Jahanshahi, who was the subsequent governor, constructed a bazaar and caravanserai at the sides of the square"

Many parts of the complex deteriorated until the 18th century in the Safavid era, when Bahador Khan Shams Yousefi Meibodi renovated and reconstructed some parts of the caravanserai and built a foursquare above it.

The complex again encountered erosion until the late19th century. The Tekyeh or Hussainiya ((Ashurkhana: congregation hall for Shiite commemoration ceremonies, especially those associated with Muharram and the death of Hussein Ibn-Ali, 3rd Shia Imam) was built by Abu-al-Qasim Rashti at the entrance of the bazaar.

This Hosayniya is one of the biggest Hosayniya’s in Iran. Given that Tekyes were newly founded during the Safavid era, this particular Hosayiniya was most probably not yet utilized as a Hussainiya at that time.

During reign if Fat’h Ali Shah Qajar, a person called Haji Hussein Attar added to the seraglio of the mosque, and also repaired and restored some parts of the mosque.

Until the Pahlavi era, people used to bury their deceased in the Amir Chakhmaq Square, but after the rise of Pahlavi, it was announced as a forbidden action. Consequently, the tombs were removed and the square got back to how it once was.

Amir Chakhmaq complex went under many changes during the Pahlavi era, most of them were conducted during the reign of the late Reza Shah. By completing the Pahlavi Street in 1935 the northern part of the square, which connected it to the Bazaar, was demolished. Thereupon they merged the Husseiniyah and the square together and defined a smaller square. It also seems that the Caravanserai was also demolished at the same time to develop the square in a more orderly rectangular shape.

After going through many changes, nothing remained but the south eastern body of the complex, which is now the Tekyeh. The municipality even tried to demolish the Tekyeh, as one of the clerestories (Persian: Soffeh) collapsed but was faced with the resistance of the archaeology office. They filled the two arcades at both sides in 1963 to prevent further drag.

Today this historical structure is still afoot, and is a host to many visitors and tourists every year.

How and when to go to Amir Chakhmaq Complex

Due to the desert characteristics of Yazd, the best time to travel to this central part of Iran, is early spring from March to mid May, and from November and onward. You can choose to travel to Yazd, by train, bus, airplane or even with a personal car. Visiting Amir Chakhmaq complex and other attractions of this city, requires you to stay a few nights in Yazd. You can use public transportations of all sorts (Except subway), to go around the city.

Get on either of these lines:

Take off at Chahar-Rah Shohada station and after a few minutes of walking Amir Chakhmaq square will be in your sight.

Yazd is one of the famous tourist spots, which leaves you with plenty of choices in terms of accommodation. We bet staying in one of those adobe guesthouses and hotels will be a unique experience.

Travelling to a new destination has its own challenges, especially for the first time. So for simplifying your travel to Iran, you can contact us and get the most professional Iran tours and Iran tour guides.

Other places to see while you’re there:

Iran Negin Travel, as an Iran tour operator offers among with Iran tourism services such as Iran visa, Iran hotel booking and etc. , Iran tours packages through which the passengers can discover Iran as they desire. As a very common request, Iran cultural tours packages and Iran daily tours. You can chose among our Iran tours packages and add Yazd to your program and enjoy your trip to Iran. In in addition to explore Amir Chaqmakh complex, you can visit the Yazd Jame mosque, Dowlat Abad Garden and Yazd old town. 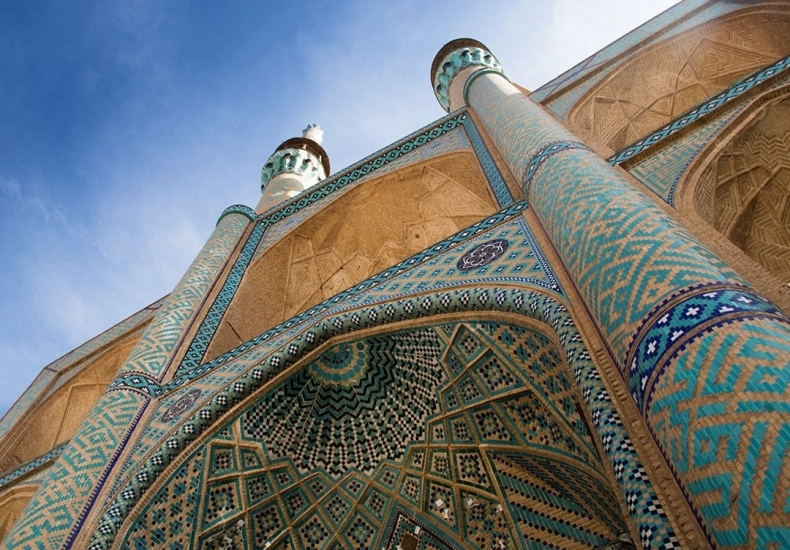