The Azadi Tower or Freedom Tower, formerly known as “Shahyad Tower“ (Shah’s memorial Tower), is Tehran’s iconic and most famous landmark located in Azadi Square, Tehran Iran. This monument has been and already is the symbol of Tehran, marking the entrance to the capital from the west. As a part of the Azadi Cultural Complex, it also includes an underground museum.

Hossein Amanat, a young architecture student at that time and currently a professional architect, won a competition to design the Azadi tower. The council of celebrations intended to build this tower to pay tribute to the last shah of Iran, Mohammad Reza Pahlavi.

This 45- meter tall structure, was commissioned by Mohammad Reza Pahlavi to mark the 25000th year of the foundation of the imperial state of Persia.

Hossein Amanat combined the elements of Sassanid and Achaemenid eras with a touch of Iran’s post Islamic architecture. So it is a combination of classical and post classical architecture of Iran.

A few names were associated with the tower until the final name was chosen. The first name was the Gate of Cyrus (Darvaze ye Kurosh). Asadollah Alam, the chairman at the Council of Celebrations of the time, referred to the structure as “The imperial Gate”. (Persian: Darvazeye Shahanshahi)

Bahram Farahvashi, a professor of Iranian ancient languages who worked with the council of celebrations, came up with the name in 1966, and before the announcement of the competition and chose “Shahyad Ayamehr” as the official name for the monument.

Hossein Amanat declared his inspiration in designing the tower. He said in an interview that every building starts from the base and moves towards the sky, and so he felt that this could be a symbol of Iran’s upward movement to the higher levels. He referred to the main vault as the classical representation of Sassanid architecture and the broken arch above as post classical Iranian architecture.

Azadi tower is completely built with white marble which came from Isfahan, and consists of 8000 blocks of stone. Ghanbar Rahimi who was known to be widely knowledgeable about quarries, located and supplied the stones. He was often known as the “Iran’s Sultan of stones” (Persian: Soltan- e Sange Iran)

The woven surface of the tower was partially done with computer, which was a modern technological technique at that time.

The main contractor of the project was MAP and the construction supervision was entrusted to a well-known stonemason, Ghaffar Davarpanah Varnosfaderaani.

The funds were provided by a group of five hundred Iranian industrialists. The overall cost of the construction, as told by MEED was about six million dollars.

The inauguration of the tower took place in October 1971, but the tower was opened to public from January 1972.

The museum is located at the base of the Azadi Tower. The austere walls, concrete ceilings and heavy doors opening to various showcases with different lightings, each of them containing a different object are what gave the basement its personality. The museum is also the house to many ancient and painted potteries, marble and paintings, gold and enamel pieces. Particular periods in Iran’s history are represented by approximately 50 pieces of selected objects.

The museum also contains a copy of Cyrus Cylinder, which the original cylinder is housed in British museum. The translation of the cuneiform carved on the cylinder is written in golden letters on the wall leading to audio visual department.

From 1975 visitors have been invited to see Iran’s diverse nature and geography along with its historical fundamentals, technical undertakings, national achievements, calligraphic poems and miniature paintings in this theatre. This project was devised by a Czechoslovak company, and it required 12000 meters of film, 20000 colour slides, 20 movie projectors and 120 slide projectors. The audio-visual programs were entrusted by Professor Jaroslav Fric (1928- 2000). Let’s not forget that the entire system was operated by 5 computers.

In 2015 German artist, Phillip Geist organized a projection mapping in Azadi tower, on the occasion of German unity day. In this project which was held from 3 to 5 October 2015, the artist visualized the subjects of freedom, peace, space and time in a poetical manner. These light installations were made of coloured words and concepts in different languages of English, German and Persian, moving in sync with live music on the walls of the tower.

Azadi Tower is the one of the sites such as Golestan Palace, Niavaran Complex, Iran jewelry museum and etc.,  which tourists normally want to visit when they visit Iran and stay in Tehran. Azad Tower is always included in our Iran tours packages,

Iran Negin Travel, as an Iran tour operator, provides a wide range of Iran tourist services and Iran tours packages. You can choose among our Iran tours packages, especially Iran cultural tours and Tehran daily tours, in order to visit Iran, have a memorable trip to Tehran and explore Azadi Tower. 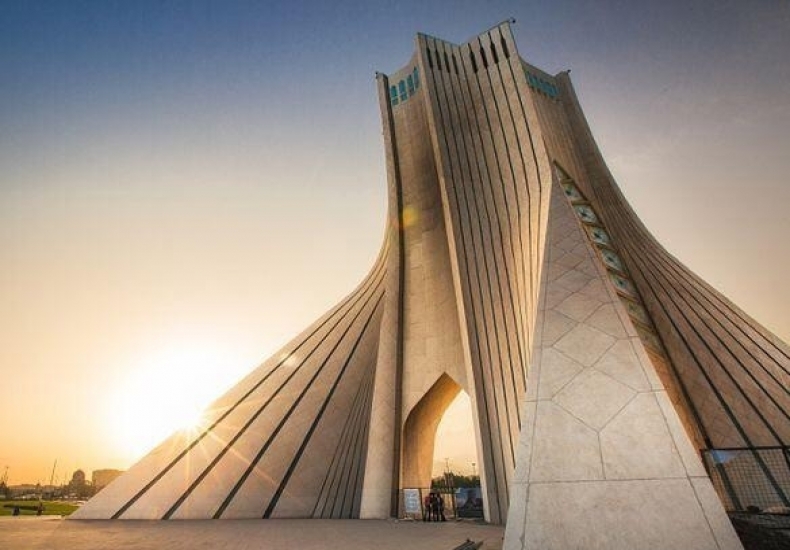 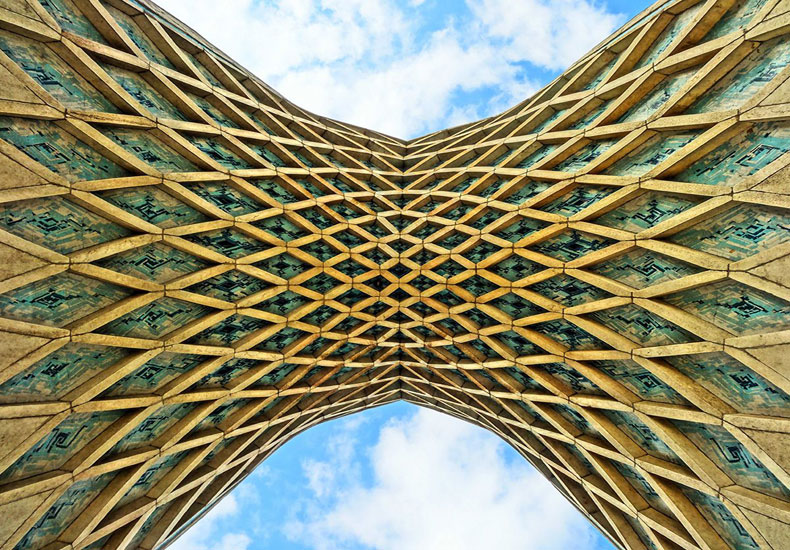