Iran is an attractive religious destination due to the history of the religions of centuries ago in the territory of the Persian Empire. Over the years of history, Iran has hosted many religions such as Zoroastrian, Christianity, Jewish, Islam and etc. During this Iran tour we will discover the places of interest of the Christians along with the tourist attractions of Iran. Our trip to Iran will begin in Tabriz and will end in Tehran, passing through Jolfa, Maku, Hamadan, Khorramabad, Ahvaz, Shiraz, Isfahan and Kashan. The sixteen days of this Iran tour will serve us to explore more than a dozen UNESCO heritage sites including Persepolis, Pasargadae, Bishapur, Naqsh-e Jahan and others.

Travel to Iran with Iran Negin Travel and get to know the history of your religion. Christian churches and monasteries as a well-designed Iran tour is made to take you to the corners of Persia and show you what you wish to discover.

Monastery of Saint Stepanos in Jolfa 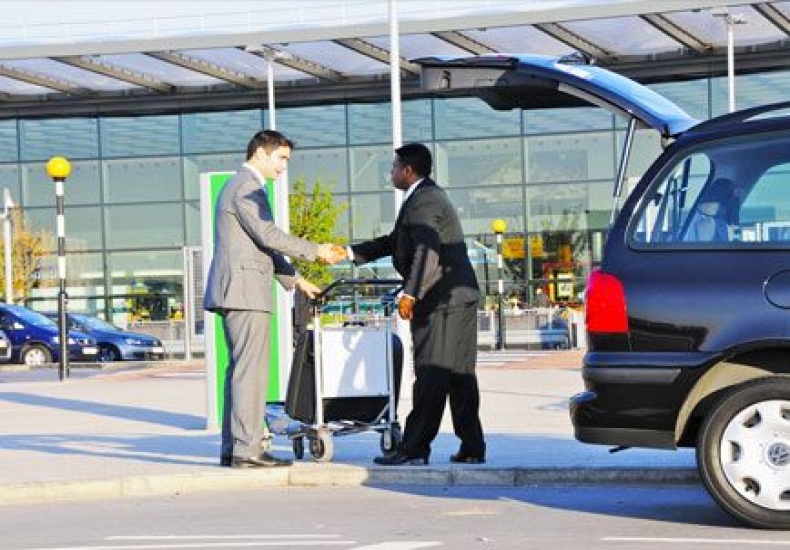 Daily Activity Arrival to TBZ (Tabriz International Airport).You will be met and greeted by our representative at the airport and transfer to the hotel to rest. 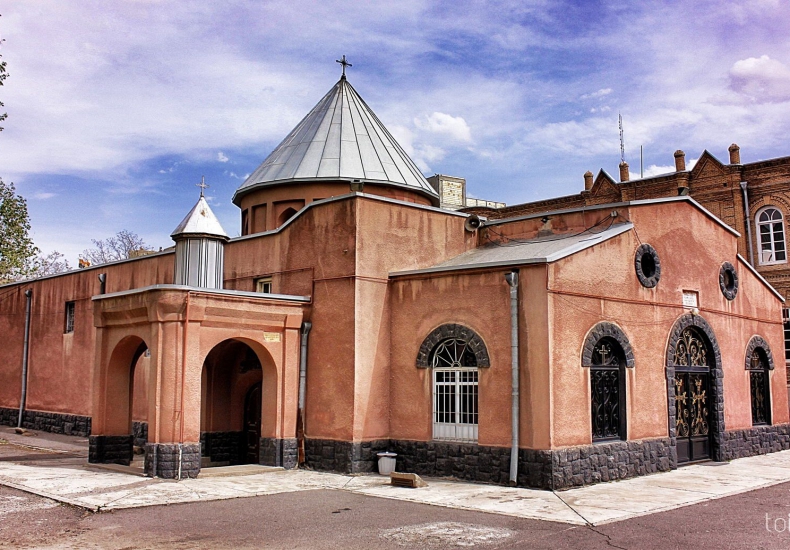 Daily Activity We'll start our full day Tabriz city tour by visiting the Saint Mary Church of Tabriz which is the largest and oldest Christian church in Tabriz and the most important Christian center of Armenian community of Tabriz for being center for Armenian national and religious ceremonies. After visiting this incredible church, its time to visit the Maryam Na-Na Church in Maralan District. The next church to visit in Tabriz is the Saint Sarkis Church in Lilavan District. Our next destination is the Blue Mosque also known as Kabud mosque which was completed in 1465, but covering it with blue tiles and calligraphy took another quarter century to be done by skilled artists. Our last plan of the day is to visit Shah Golu also known as El-Golu, a large park with an artificial lake. Right after this plan we'll be transferred back to the hotel. 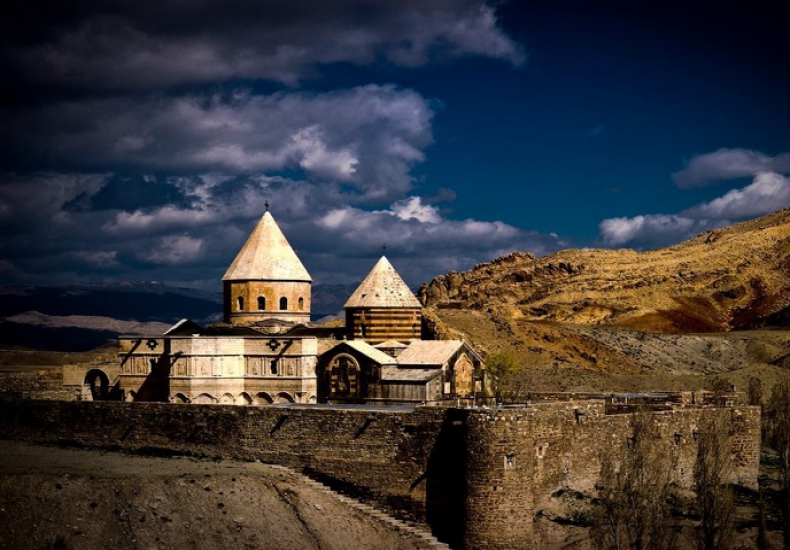 Daily Activity After having breakfast at the hotel we'll visit Arg-e Alishah, an unfinished 14th-century monument that later was served as a military fortress during the Sovietic-Persian Wars of the 19th century. After the fortress its time to visit the Grand Bazaar of Tabriz which is the only bazaar on the UNESCO list of World Heritage Sites. Tabriz was one of the most important commercial centers along the Silk Road, so this amazing and beautiful Bazaar is the evidence of its greatness in the past. During our visit we'll enjoy browsing for spices, jewelry and carpets and discover the residents shopping their daily needs.  Right after the Grand Bazaar, we'll be transferred to Maku which is 246 Km away from Tabriz to visit the Saint Thaddeus Monastery, also known as Qareh Kelisa (Black Church), an Armenian Monastery located in a mountainous area. 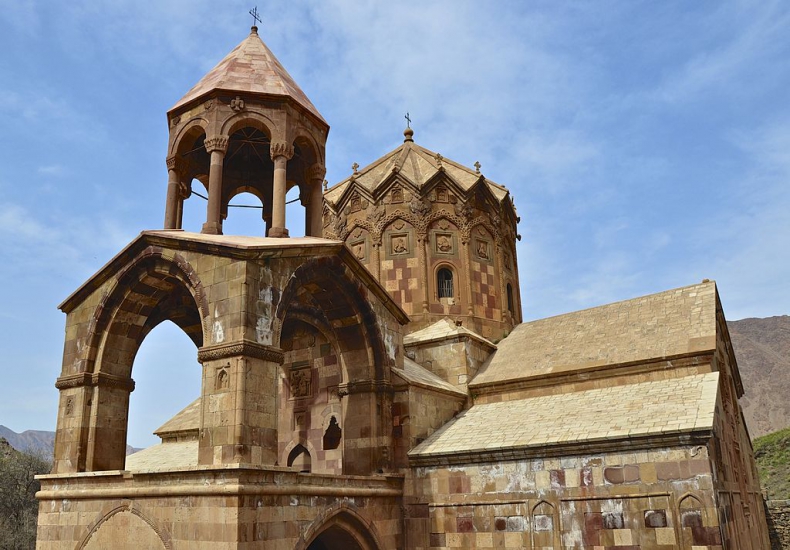 Daily Activity Today, we will move towards Jolfa to discover the Monastery of Saint Stepanos located on the Iranian side of the border between Iran and Nakhchivan in a deep canyon along the Aras River.  This beautiful Monastery was build in the ninth century. Saint Stepanos was rebuilt  during the Safavid Dynasty due to the damages caused by wars and various earthquakes. The Monastery was inscribed as a part of the Armenian Monastic Ensembles of Iran in 2008. Before leaving towards Tabriz we'll visit the Chapel of Chupan which is a small historic Armenian church building in a mountain valley on the west side of Jolfa near the Aras River. 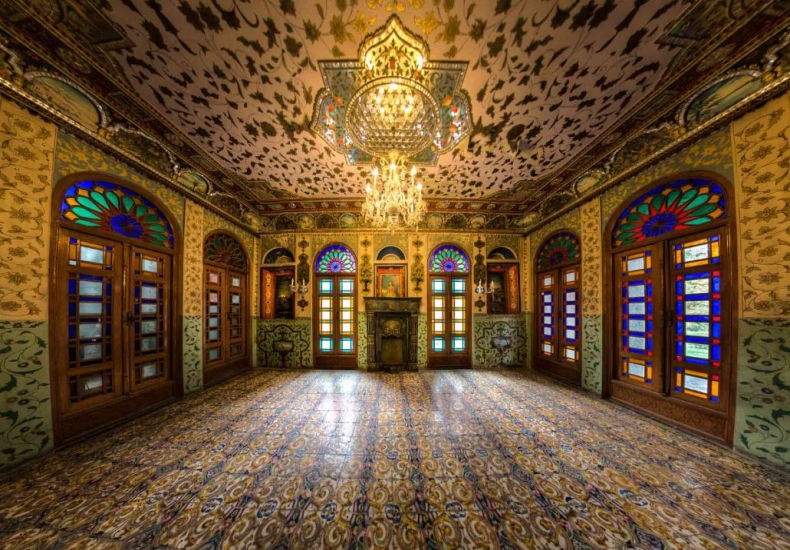 Daily Activity  After having breakfast and making the check out, we'll be transferred to the airport to take a flight to Tehran. Once we arrive in Tehran, Saint Sarkis Cathedral which is an Armenian Apostolic Church its the first place to visit. This cathedral is the cathedral of the Armenian Diocese of Tehran and one of three Armenian dioceses in Iran. Our next destination is Saint Mary Church, another Armenian Apostolic Church which was registered in 2002 as a national monument by the Iranian Cultural Heritage and Tourism Organizatio. Later, Its time to visit the only World Heritage Site in Tehran, the lavish Golestan Palace  which was nuilt during the Qajar Dynasty the late 1700s, this incredible walled complex is centered on a landscaped garden with pools. Few steps far from Golestan Bazaar we'll discover the Grand Bazaar of Tehran. After having lunch we'll an Armenian cultural center called Ararat located in the Armenian neighborhood. 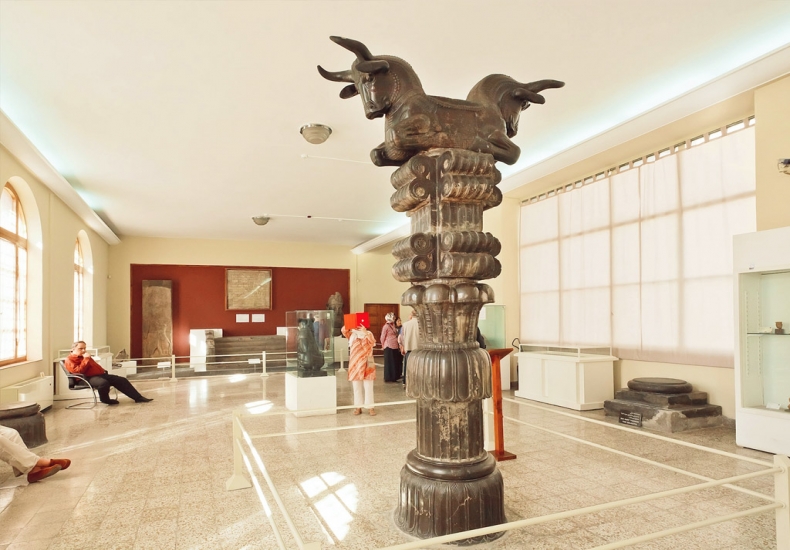 Daily Activity Today will visit the Armenian Cemetery called Doulab Cemetery which consists of 5 main parts, namely, Armenian Apostolic, Eastern Orthodox (Russians, Georgians and Greeks), Roman Catholic, Armenian Catholic, and Assyrian (Assyrian Church of the East, Chaldean Catholic and Protestant). (Optional). After having lunch we will visit National Museum of Iran, where you will fabulous historical items from 5000 BC which shows brief history of Persia. Afterwards we'll enjoy having coffee at famous cafes around the National Museum. 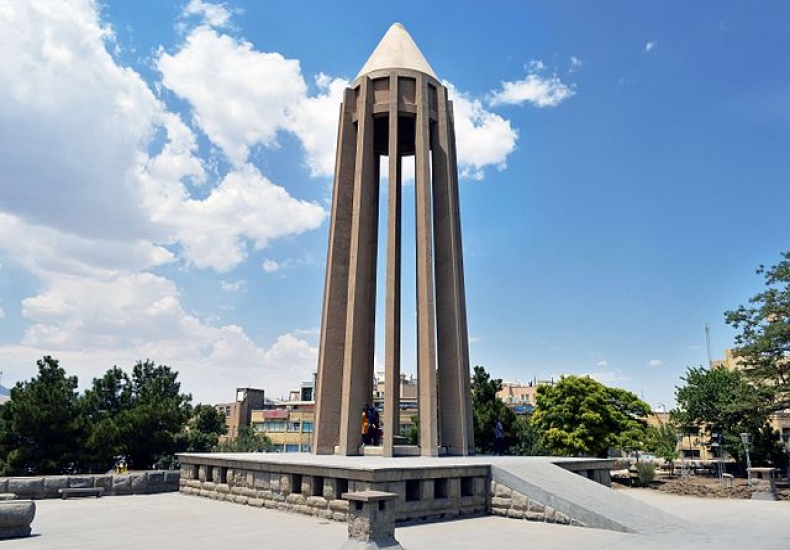 Daily Activity  After having breakfast it's time to be transferred to Hamedan province which is situated in the Middle Western Iran.  Once we arrive in Hamadan we will visit the tomb of Queen Esther (Queen of Shoosh and the wife of Xerxes the great) and her uncle, Mordechai. Our next destination is Tomb of Baba Taher who was one of the most revered and respectable early poets in Iranian literature. He was known by the name of Baba Taher-e Oryan, which suggests that he may have been a wandering dervish. Afterwards we'll visit the tomb of Avicenna who was a Persian physician and philosopher. 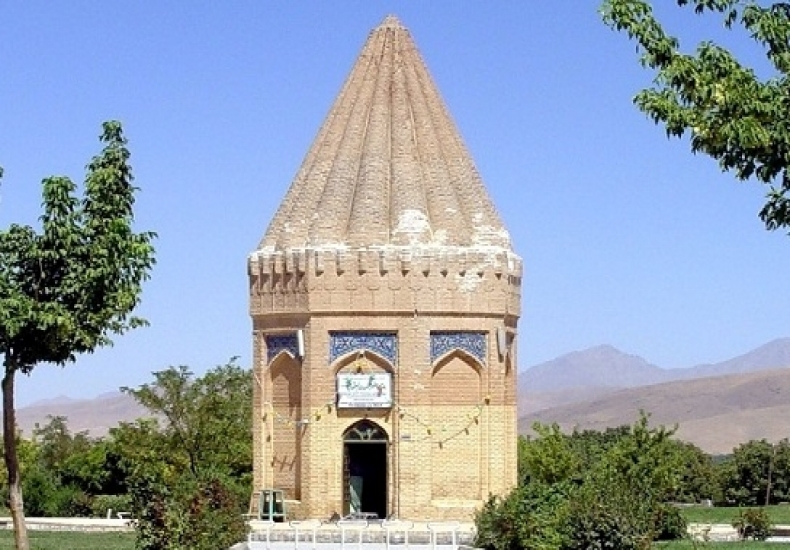 Daily Activity After having breakfast at the hotel we'll be transferred towards Khorramabad. On our way we'll stop in Tuyserkan to visit the Tomb of the Prophet Habakkuk who was one of the most enigmatic major figures of the Bible and evidence suggests that he lived at the end of the 7th century BC. Once we arrive in Khorramabad we'll visit F Then moving south, you will have some stop in Khorm Ababd. In Khoram Abad, visit Falak-ol-Aflak Citadel and the Brick Minaret. 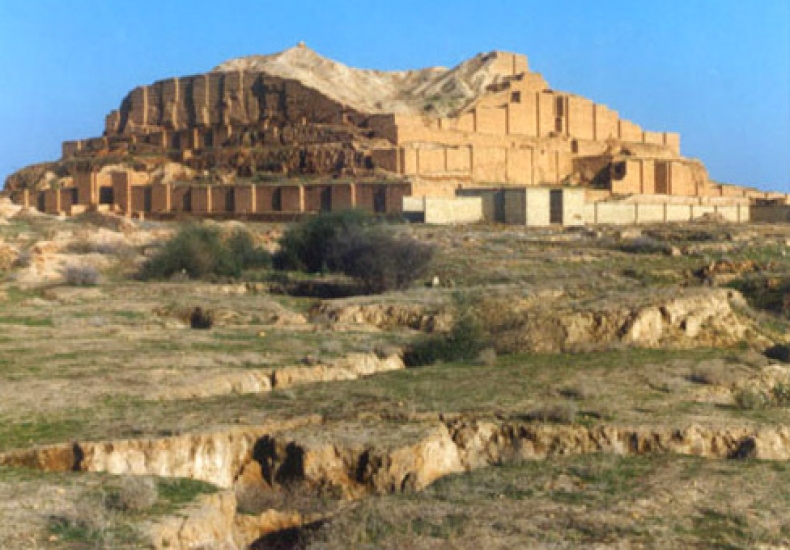 Daily Activity Our day starts by being transferred to the ancient Persian city named Susa. Once we arrivie we'll visit Shrine of Daniel the prophet who was one of the greatest prophets of the old Testamen. Our next stop, Tchogha Zanbil, is a very important UNESCO World Heritage Site (the first of Iran) which belongs to Elam Dynasty with 3200 years of history. Tchogha Zanbil is one of the few extant ziggurats outside Mesopotamia. On our way to Ahvaz we'll explore another Unesco World Heritage Site named Shushtar Hydraulic System. Next we'll go to Ahvaz 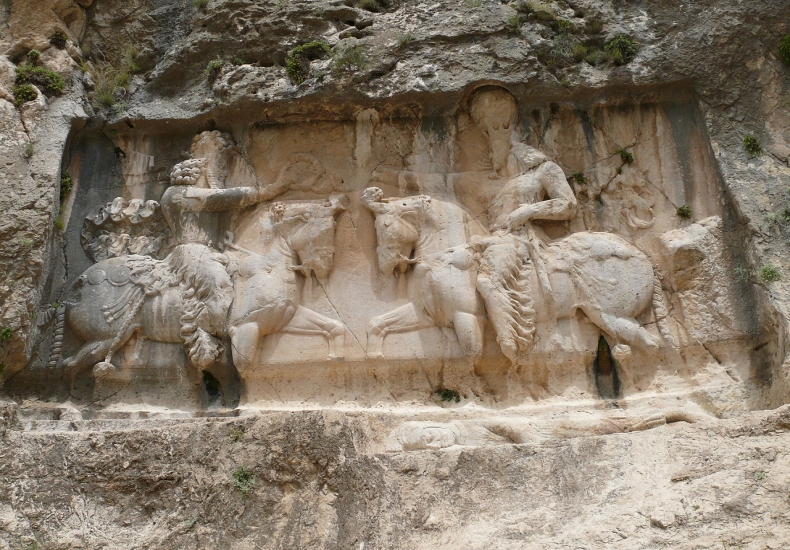 Daily Activity After having breakfast we'll drive to Shiraz. On our way we'll visit several outstanding sites dating back to Elamite region (3-5 thousand years ago) and Sassanid eras (1800 years ago). First of them Bishapour city remains which is situated south of modern Faliyan in the Kazerun County, on the ancient road between Persis and Elam. The road linked the Sassanid capitals Istakhr (very close to Persepolis) and Ctesiphon. Our next marvelous step will be Tang-e Chogan which is a valley with a running river at north of the Ancient city of Bishapour. There are 6 rock reliefs telling the story of the Roman Empire defeat by Shapour II the Sassanid king,  and king Bahram II (276–293) defeating Arabs and rebels. Afterward we'll move to Shiraz 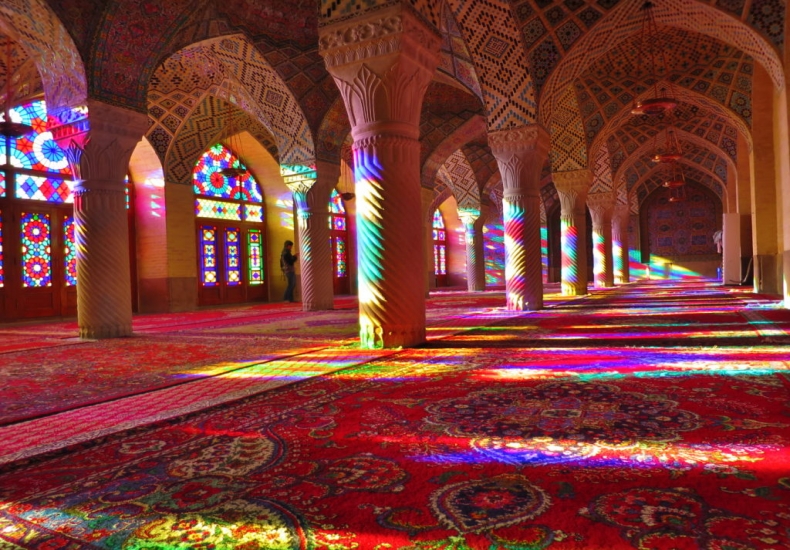 Daily Activity We'll start our first day in Shiraz in the morning by visiting Nasir-ol-molk mosque, also known as the pink mosque. Nasir-ol-Molk mosque which is a masterpiece bulit by Mirza Hassan Ali Nasir-ol Molk  during the Qajar. Later we'll visit Narenjestan Qavam garden which is a beautiful garden with a unique glassware and painting inside the building.  Zand complex is the next location we'll head to. This historical site is composed by Vakil bath, Vakil mosque and Vakil Bazaar. The next site is the Karim Khan Citadel which is next to the Zand complex. As the final plan of the day, we'll visit the tomb of two famous Iranian poets named Hafez and Sa'di who have contributed much to Persian literature and philosophy. 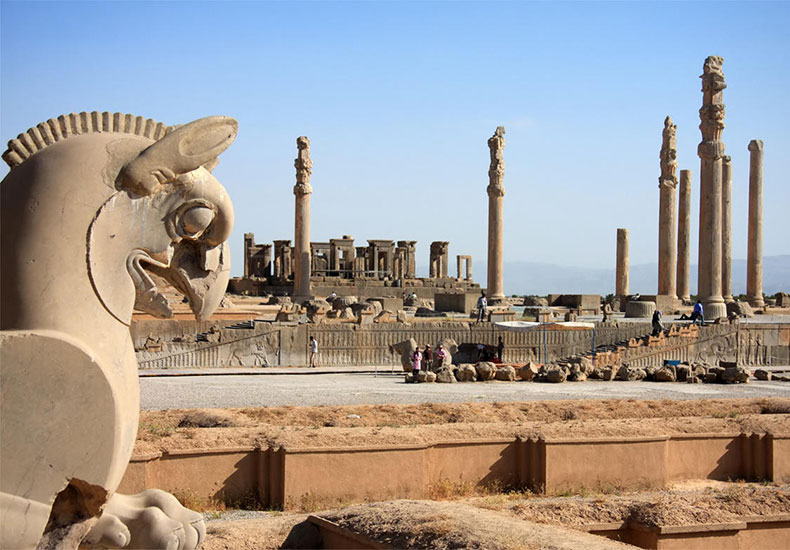 Daily Activity The most important and most wanted day begins with our morning transfer to Isfahan. On the road, we'll head to Persepolis which was the ancient capital of Achaemenid Empire and in 1979 was registered as UNESCO World Heritage Site. Persepolis was the former capital of Darius the Great which was founded in 512 BC. After this unique visit, we'll head to Naqsh-e Rustam. Naqsh-e Rustam, also known as the Necropolis, is where Darius and his successors are buried. After Necropolis we'll visit; Pasargadae where is located the tomb of Cyrus the great. Right after visiting Pasargadae we'll continue our road trip to Isfahan. 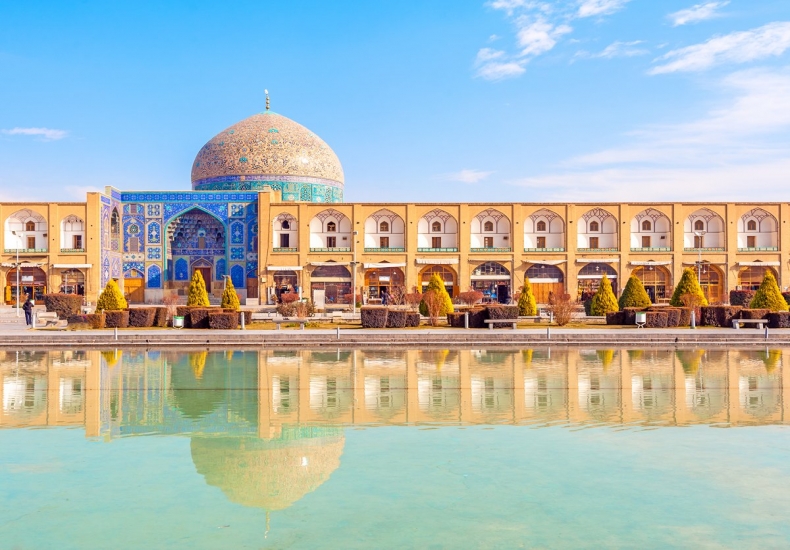 Daily Activity Our first day in Isfahan starts by visiting at a UNESCO World Heritage Site. the Masjed-e Jamé, also known az Friday Mosque,magnificent in its rich detail and bold design. Our next stop is another UNESCO World Heritage site located in the heart of the city with full of history surrounded by important sights. Naqsh-e Jahan Squarte, also known as Imam square, was built during the 17th century and is one of the largest squares in the world. Located in the southern side of Naqsh-e Jahan we’ll visit Shah Mosque, recognized by its magnificent tile-work, soaring cupola and minarets.  Our next stop, Sheikh Lotfollah Mosque, is situated in the eastern side of Naqsh-e Jahan is also known as Ladies Mosqhe as it was built for the Shah's harem. On the western side of Naqsh-e jahan, Ali Qapu  Royal Palace is waiting for us to visit its beautiful music rooms and the balconies where Safavid Era's kings would enjoy the polo matches celebrated at the square. Our final plan is to visit the Qeysarieh Bazaar. where you will explore hundreds of local vendors that specialize in traditional arts and crafts, it’s a wonderful place to shop souvenirs. 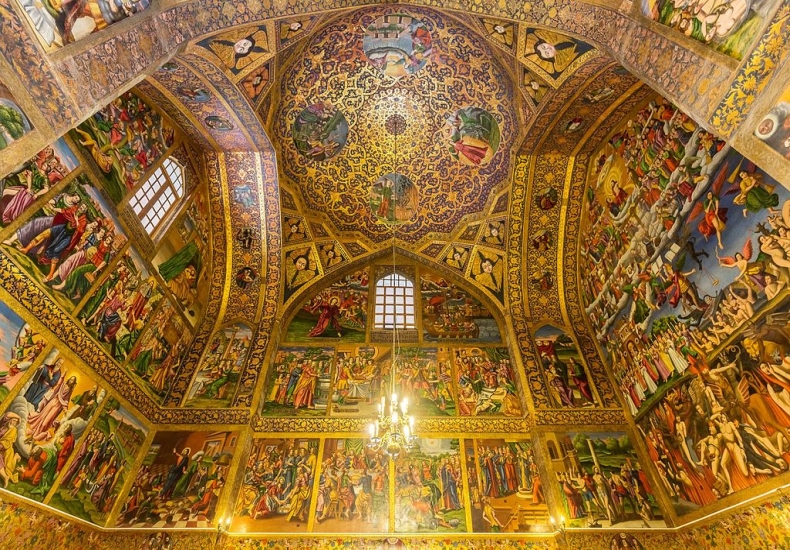 Daily Activity In th`Today we'll visit the city’s Armenian quarter named Jolfa, where we’ll explore more deeply the region’s complex history as you will visit several Christian places including Vank Cathedral with its lavishly decorated interior and unique blend of Islamic and European architectural elements. The other church to visit is Bedkhem Church. which is one of the most important historical churches of the city and belongs to the Shah Abbas I era located in Jolfa neighborhood. Our next stop is at Music Museum. Right after we'll enjoy walking in the allies of Jolfa and have a coffee at one the cafes. In the evening, you will visit some of the centuries-old, bridges on Zayandeh River such as Shahrestan Bridge,  Sio-seh-pol and Khaju. 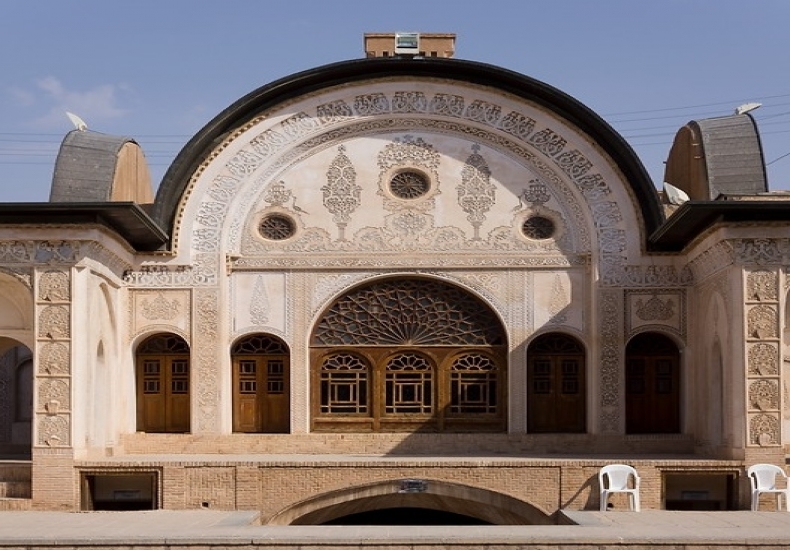 Daily Activity Its time to say goodbye to Isfahan and move towards Tehran. On our way we'll visit Abyaneh village. Abyaneh Village also known as the Red Village due to its red soil and houses. After exploring the beautiful houses and alleys in Abyaneh Village we'll go to Kashan which is a city full of old and traditional houses.  Once we arrive in Kashan we'll discover Fin Garden (A UNESCO World Heritage Site). Then, we will visit Boroujerdi Traditional House which was built during Qajar Dynasty about 130 years ago. Abbasi house is another mansion located next to the Boroujerdi House where we would have some tea. We'll continue our journey to Tehran to check in at the hote. 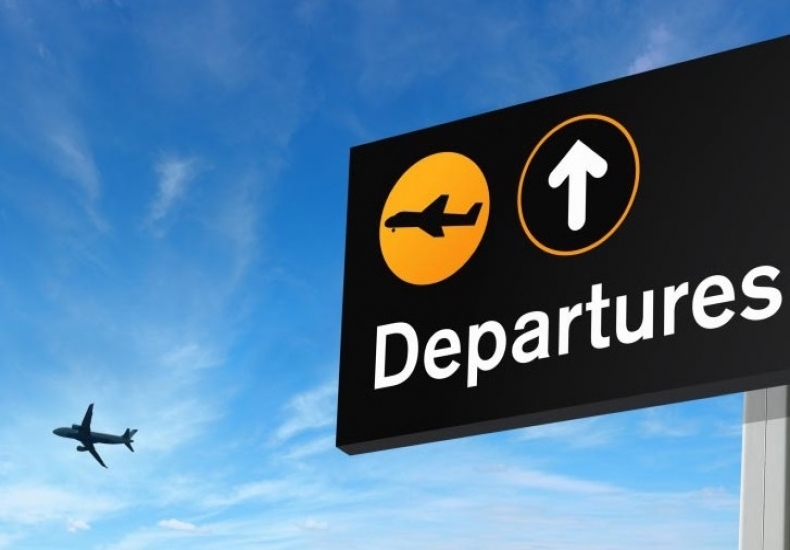 · 15 nights accommodation in the mentioned cities

· Excursions mentioned by the itinerary

· Entrances to the mentioned sights

· Tip to driver or guide

· Items not mentioned in the inclusions

Make sure that your passport is valid up to 6 months before you travel to Iran. For more info please contact us!

Iran Negin Travel Iran tours include air-conditioned Sedan, Minivan, Minibus and Bus for transfers and transports depending on the group size.

The maximum check-in baggage allowance is 20 kg per person.

* Starting from in USD per person 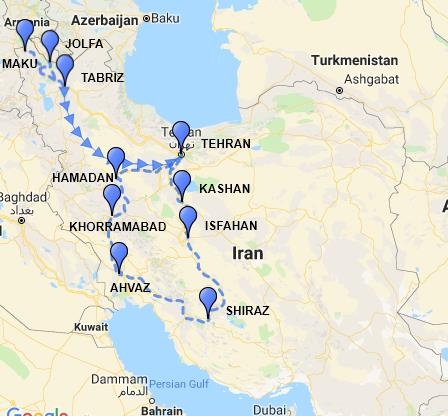 Flight from Tehran to Isfahan

Transfer to Abyaneh and Kashan