A young family’s travel to Iran

This young family visited Fatima Masumeh shrine, called the grand mosque. The husband who was originally Iranian, went on a road trip with his Iranian parents and family to Yazd, visited Jameh mosque of Yazd, Tower of silence burial ground and stayed in “Daad hotel” in Yazd.

From Yazd they went to Qom, and learned a bit of pottery and different names it’s known by in different cities. They went desert trekking in Maranjab desert. From Qom they went back to Tehran and took a Mahan Air flight to Shiraz from Mehrabad Airport, saw Damavand peak from up above.

In  Shiraz stayed at Chamran Hotel, took a detailed tour of Persepolis with from a local guide were with. They learned so much about its history and the 200 years it took to build the palaces in Persepolis, different symbols, inscriptions and carvings meanings and history behind them, also the international language of the time called Aramic language. What was interesting was that at that time, pregnant women had pregnancy leave with salary and insurance! Some tablets from the Persepolis are located in Chicago University. The friendliness between the Persians, and Persian’s ancient occupations were quite evident from the inscriptions, as told by the guide. They visited Naqsh-e Rustam carved out of rock, belonging to Achaemenid kings.

Nomads of Fars province, Quran gate of Shiraz, Mausoleum of Sa’di (the Persian poet), Nasir-ol- Molk Mosque (the pink mosque of Shiraz), were the places they visited in Fars province.

From there they came back to Tehran, spent some snowy days in Tehran during December 2016, and went to Sa’d Abad palace, which belonged to the Shah of Iran before the revolution. They tasted Persian food in Shamshiri restaurant. And took a glimpse of Tehran’s mountains from the Nature Bridge. 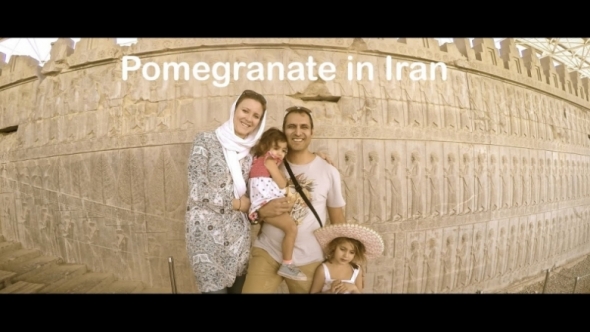 A young family’s travel to Iran

A little film I made of my travels in Iran with...

You can see all the illustrations here: